GEORGE W. WASN’T THE ONLY ONE WHO NEEDED AN EXIT STRATEGY….

I’m still laughing and scratching my head as I remember some of the business strategies observed during my recent three months in India.  Consequences were not factored in; life was totally in the moment; and time and again I would come upon abandoned projects—road repair, half-finished buildings, a trail ending at the edge of a cliff, abandoned fields—as if money had run out or there was no more interest in the work at hand.

I watched one of these projects grow and fizzle during my three weeks in Gokarna, a town south of Goa on the Adriatic coast where I was staying in a small compound on the beach (see Jan. 21st blog). It was a delightful place of simple cottages surrounded by a spacious sandy area with numerous tall palm trees, and an ambitious owner whose plans included the making of a farm, a petting zoo, and an internet café. The last part of the plan depended on his success in finding a wife, which, in and of itself, was a difficult task for a middle-class Indian who needed to find someone of his own “class” with enough money to be a partner in his work. She was to run the internet café, he told me. These were imponderables, which would be settled later. But first he decided to dig a duck pond in the front yard. I had not seen his two ducks and asked him if he realized what those ducks would do to his lovely sandy “lawn.” The head just wiggled to and fro and he smiled at me with the look of, “Don’t confuse me with facts when my mind is made up.“ I shuddered to think of what the ducks were doing to his upstairs apartment and, having had experience with their bathroom habits, could see the cessation of all future moonlit walks through the pristine dunes.

To attest to our owner’s imagination he designed the pond in the shape of a turtle and lined it with stones that resembled a shell. Then he filled it with water and loaded it with lilies and let it sit for several days. At this point the lilies had died and the water had a green scum on it. His little dog made regular sojourns into the water, and sand began to gather at the bottom. Not to be deterred, our man regaled me with tales of the animals he was going to import for his zoo and the grass he was going to grow so they could graze. Grow grass in sand? Hmmm.

The painful knee episode. You didn’t believe me?

It just gets better and better….

Even the camel can’t contain himself….

And the water is added

When I left, the owner was still planning to take down most of the buildings to make way for his “farm,” but he also wanted his “wife” to start a small restaurant for the remaining guests (all four?). He was ebullient about his plans and the duck pond was soon forgotten. As I made my way past the deserted pond and out of the compound, he was sitting on his swing smiling while the dog splashed in the thick green water. I thought I might return next year to see how his farm was coming along and to share in his ebullience.

I soon realized that a good number of Indians don’t worry about tomorrow. If they did why would they throw garbage on the front lawn? I know, I know. There’s another side of India I may be neglecting, but I’ve always preferred my adventures “down and dirty” as compared to the sojourner who insists on classy hotels and the accoutrements of business travel. Traveling that way you side step the messy parts of Indian life and can simply have your driver pull up to your hotel and avoid the crowds, noise, and dirt. But you also miss the side that I’ve been describing–the color, myriad smells (natural and manmade perfumes; cooking; flowers; fields), and the festive atmosphere that await you in the real India–the crowded bazaars, the thrill of darting rickshaws, and the panoply of flamboyant, imaginatively-dressed people. 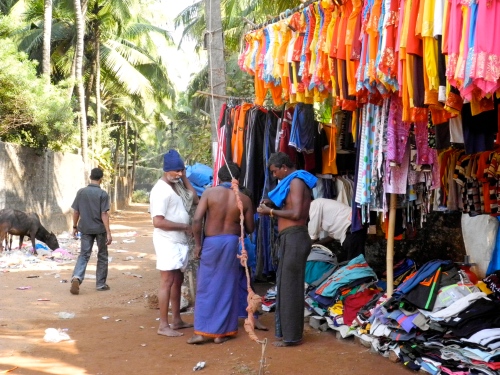 A small bazaar along the road 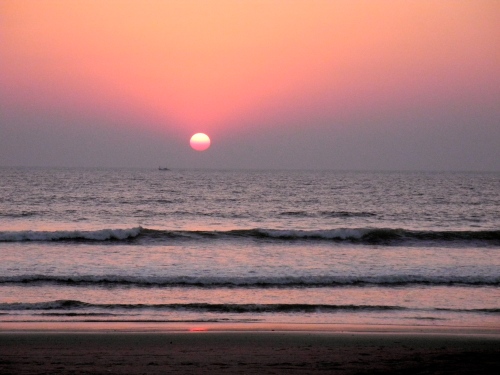 Sunset on the beach outside our cabin

2 responses to “GEORGE W. WASN’T THE ONLY ONE WHO NEEDED AN EXIT STRATEGY….”