I was one of the lucky New Jerseyites who did NOT lose her home or have a tree fall on her house. It fell in the backyard, instead, but, since it came from my neighbor’s yard, and he is handy with a chain saw, it has now been spirited away. The only signs of its having visited me is a broken fence and smashed dogwood tree. There are those who feel that this is nature’s way of saying to our political candidates, “Hey, what about global warming and the environment? Nobody seems to be talking about that any more and it’s just getting worse. So pay attention for a change!” 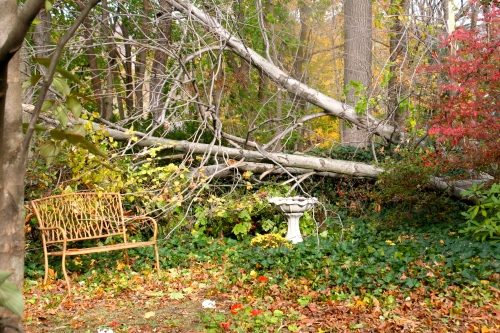 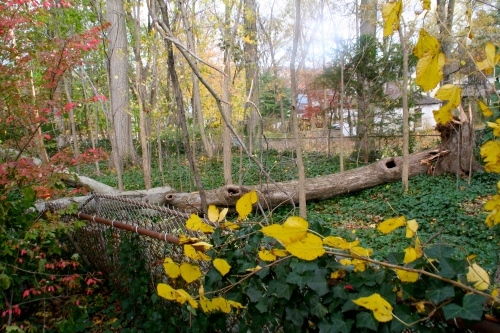 The root of the problem

And this is nothing! Giant trees were uprooted all over town, and there are those who still have no electricity. I was only in the dark for five days. Fortunately, I had the foresight to install a backup to my sump pump after Hurricane Irene flooded my basement, so was spared last year’s misery. It’s actually heartwarming to see how people pull together during these near-tragic experiences. Churches, libraries, stores, and restaurants all welcomed those who had no heat or light. Free meals were served, phones were charged, children were tended, all in a loving, helpful spirit. The streets of Maplewood Village were teeming with families just walking together and enjoying community interaction. For the first time I encountered a long line outside our movie theater. And the two pizza parlors were bursting at the seams. It was almost like New York City on a Friday night…crowds everywhere.

All of this came days before I was to put my house on the market and head into the great unknown (which means that I really don’t know what the future will bring, but who does?). I returned in September from my usual mountain climbing in the Olympic mountains of Washington state (I’ll tell you about that in another blog), and decided that it was time to unclutter my life. Just trying to walk through the piles of “stuff” in my attic made me sick to my stomach. I bet many of you have felt the same way and come to the same conclusion…and others have just been putting it off, because it’s such a monumental task. I can understand why. It’s a horror! So while uncluttering my files and filling the dump with years of unnecessary memorabilia, I suddenly decided that I didn’t need a house and a yard, either, and had never found that maintenance was my forte. I’ve owned houses of varying sizes since 1958. Enough, already. Time to sell.

What I didn’t know is that nobody just sells a house these days. They style or stage it so that not one semblance of the owner’s personality is betrayed. God forbid that a human being once inhabited this domain. The goal is to get as near to Pottery Barn or a movie set as you can. Remove all rugs, all stair carpeting, and all photographs of family gatherings. And definitely remove books from bookcases like the floor to ceiling display of all my favorite authors past and present, and replace them with Roseville pottery and classy knick-knacks.  Dig out the crystal goblets you received as wedding gifts a hundred years ago, and put out a half-filled decanter of Scotch surrounded by shot glasses, and you show a family that doesn’t read, doesn’t cook (all counters are bare), doesn’t wash, but finds plenty of time to drink and look at candlesticks. Within a week you’re frantically searching for your tax forms, your toothbrush, and your aspirin. They’re all secreted away in the attic, the cellar, or miscellaneous bureau drawers. Living like this is like playing a constant game of Concentration. It may be good for the brain, but it’s murder on the nerves.

I’m relating this to you, dear reader, because I want you to be forewarned. If you have had a similar experience trying to sell in the modern real estate market, do tell me. We can laugh and cry together!

The only good aspect of this rush to sell is that I shall leave for Nepal on November 14, three days after my Open House, and be lost in the Langtang region of the Himalayas for a month. By then I will have recuperated, the house may be sold (I have a wonderful daughter who will fend for me in my absence, while I shall be trekking with the other daughter), or I may have fallen off a cliff. At any rate I shall NEVER EVER  buy or sell another house!